Discussion of bugs and problems found in Altap Salamander. In your reports, please be as descriptive as possible, and report one incident per report. Do not post crash reports here, send us the generated bug report by email instead, please.
Post Reply
26 posts

Salamander is displaying warning about running in Compatibility Mode. We will fix this problem in next Altap Salamander EAP version.
Top

this is no bug. You must add a Manifest and supportedOS GUID for 8.1

http://msdn.microsoft.com/en-us/library ... 85%29.aspx
"Theory is when you know something, but it doesn't work. Practice is when something works, but you don't know why. Programmers combine theory and practice: Nothing works and they don't know why."
Top

Even though I agree that with Microsoft developers on this, I can't help myself, but react to Andre.Ziegler with a quote:

How do I grid of this message box upon every starting Salamander with Version 2.54 on 8.1?
Top

It is not possible with Altap Salamander 2.54, problem is fixed from version 3.0.
Top

Therefore, first of all, I would like to understand the consequences concerning functionality and stability of Salamander 2,54 under these circumstances. As I understand, there are none. Windows is lying to AS about it's version which breaks AS compatibility mode check. Windows does not use any compatibility mode, so AS runs just as usual. Is this correct?

According to the document Andre.Ziegler pointed to, the fact that Windows is lying can be prevented by including a compatibility-section in the application manifest. Since manifests in the file system are supposed to take precedence over ones in the resources, I extracted salamand.exe's manifest, added the said section and placed the manifest alongside the executable. However, I still got the compatibility warning. I then also tried to modify the embedded manifest in the resources, but this did not help either.
Did I miss something with this procedure? Is there something more broken than just the GetVersion API? Or did the manifest not get honored?

I checked the following places in the registry and cleared the one pointing to salamand.exe before testing any change.

There was an entry in HKEY_CURRENT_USER\Software\Microsoft\Windows NT\CurrentVersion\AppCompatFlags\Compatibility Assistant\Store which when deleted, was recreated without notifying me on, at least, start and termination of AS.

By the way, I would prefere to not update AS until unicode is available at least for find and the viewer (or I am forced to switch to an x64-OS).
Top

Note: AS 3.02 has a new code path for detecting Windows version (GetVersionEx is deprecated, we are using Version Helper functions now).

Unfortunately I'm not sure why your attempt didn't work.
Top

I just hit upon this compatibility mode messagebox myself and can confirm that by adding the correct supportedOS Id to the manifest, Altap Salamander 2.54 will no longer popup the message about running in compatibility mode.

I opened the salamand.exe in resource tuner and added the following section below to the manifest;

I recently upgraded from Win7 to Win10. Was running AS 2.54, no compatibility Mode popup.
Then upgraded AS to 3.06 and the running in compatibility mode pop up appears each time I load AS.
Running 64 bit Win and AS.

Apparently whatever fix was implimented for Win 8 needs done again for WIN10.
Top 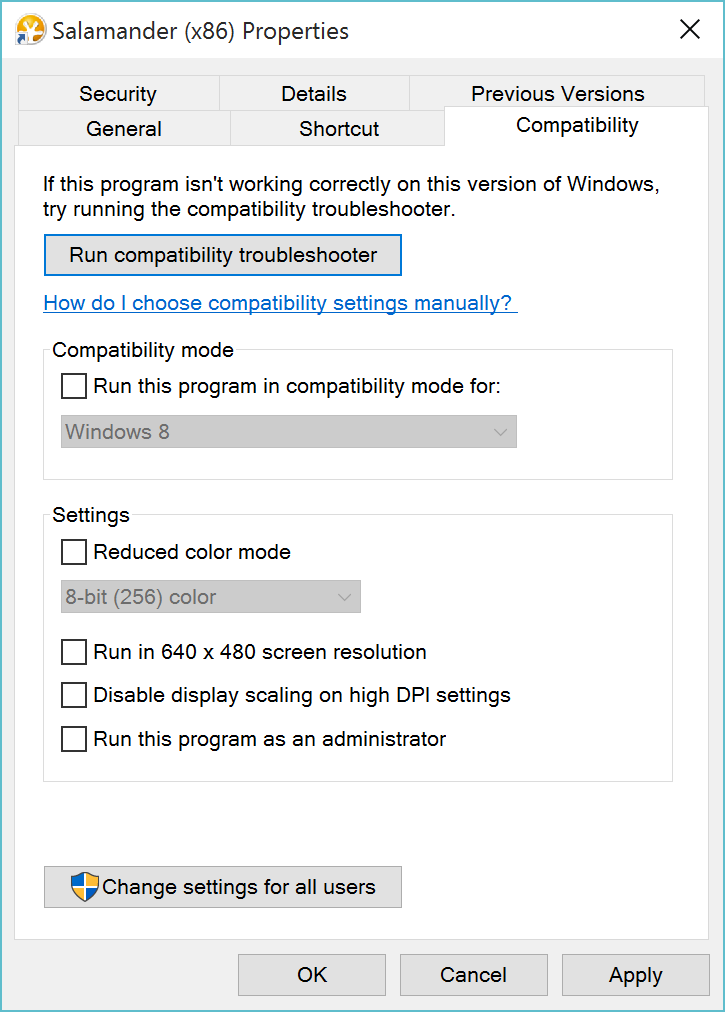 Yes, first thing I did was check this, then I turned it on then off, got the popup either way. I went to the executable in C:/ program files/ and it was also not checked in the properties there, for Salamand.exe.

I noticed that AS 2.56 is still in C:/Program Files (x86) and that 3.06 was installed in C:/Program files. At any rate, it's not checked (nor needed) in either. Just can't get the message to stop popping up.
Top

The problem is definitely fixed, Altap Salamander 3.06 is declared as Windows 10 compatible and works fine there, we are using it with Windows 10. There must be some problem on your computer, but right now I have no idea where

Could you please uninstall AS 2.54 to be sure it is not started instead? You can keep configuration in registry if you want (you will be asked during uninstall procedure).
You can also try to rename C:\Program Files\Altap Salamander\salamand.exe to some salamand_2.exe and start it. Does it display warning?

I never received the message when I used 2.54, and now (today) I get the message every time I start 2.54, but not 3.06. I'm getting a little old, so maybe it's senility. I'll just uninstall 2.54, perhaps there's some sort of battle going on between them.
Top
Post Reply
26 posts