by netgazer
I'm a big fan of Salamander and been using it for many years. I'm just wondering why the UI hasn't been updated to use newer icons. There are many file manager apps around and most have better UI icons. Any reason for this?

by Jan Rysavy
Are you able to help us update these icons? Unfortunately high resolution, high color icons is something we are not able to do.

One attempt to recreate toolbar: http://forum.altap.cz/viewtopic.php?f=8&t=3168

by therube
I totally disagree.
Classic, old, stodgy - clean, clear, efficient. Just what it should be IMHO

(There are two areas that I'll note that could stand change. The default font (which I'm pretty sure we can change ourselves) was better in 2.0, I believe it was. And the icons for Folders are too similar to ZIP [archive in general] icons.)

by Jan Rysavy
AS 2.54 font should be Windows UI font: Tahoma in Windows XP, Segoe UI in Windows Vista and Windows 7.

by omega
Same with therube I prefer the current icons. I certainly don't like the look of the newer UI icons found in SpeedCommander, Krusader, MuCommander, XYplorer etc.

by otrov
I also share thereube's thoughts
Icons look as they should with current UI elements
And archives icon, as mentioned, is very similar to folder icon (on Windows 7)

by Wizzard
Agree with therube. This is why I like Salamander, because of very nice and simple icons.

by SelfMan
Like I said in the czech part of the forum, I love this simplistic smart design. I even dont use most of the icons. Drive selection at most. 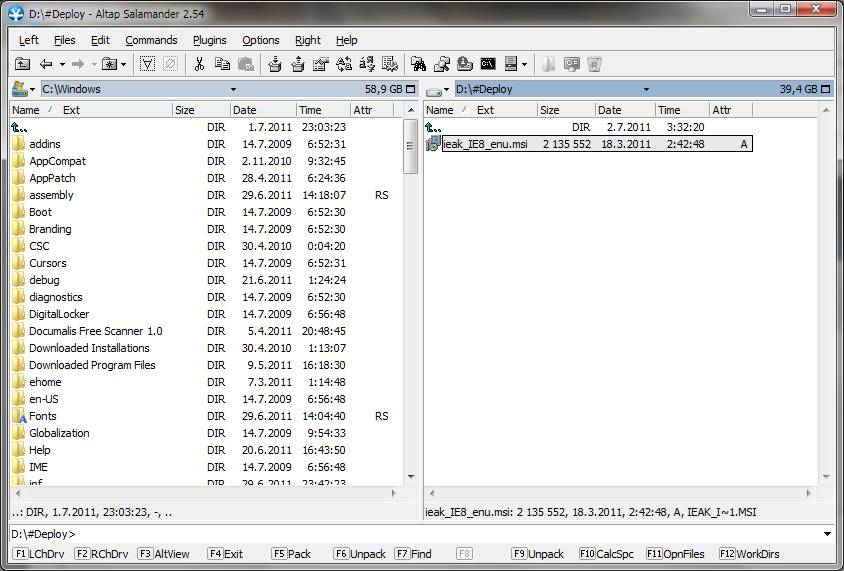 by SvA
I hardly know how toolbar symbols look like in Salamander, because I have only enabled the User Menu Bar and the Command Line. I access all frequently used functions through hotkeys.

But looking at them, they don't look outdated to me. They look crisp and distingishable (which is the second most important property after recognisability (i.e. to be able to tell it's function from appearance) which I cannot judge because I don't use them.)

What I don't like, though, about the toolbars is the fact, that all icons are greyed out and only take it's color when hovering over it. Greying out UI elements always has been an indication the function is unavailable. Moreover it unnecessarily limits distinguishability.

The situation concerning this is not all that bad in menus, because you can concentrte on the text rather than the symbol, but still it is unnecessary and slightly irritating.

by cpb
yeah what icons? With my setup there's... 3. I don't care about changes to icons so long as they are optional and don't slow anything down.

by roman2
I also enjoy the current UI. Have for several years.

by otrov
I remembered this thread, and have a question which I think is better suited here then in new thread.

Latest available AS version (3.0 beta), doesn't have any change in regards to UI.

Just today I had to get a list of files (with pattern search) from FTP server, and I know FTP plugin can't search remotely, so thought to look for some program, hopefully FileZilla will do it. Simple Google search revealed also WinSCP as candidate, and indeed - it can "search" FTP remotely. I download it.

What I noticed is that GUI is very similar to AS, with similar (or same) functions, and dialogs, so it's obvious to me that developer of WinSCP is working on AS too. WinSCP program is free of charge, unlike WinSCP plugin, plus it has FTP function which WinSCP plugin doesn't have, and more over, GUI (with native interface) looks just like I would have expected new AS version to look like. Looks modern, intuitive and native and it's fast.

So I was wondering if AS will get this facelift, as I suspect that development of WinSCP is related to AS?

For Salamander UI update we should probably target Windows 7/8 look (I mean desktop loop, not Windows 8 Metro). I'm not sure about new Visual Studio 2012 look, it is not accepted well:

by roman2
I think you should forget about changing the UI style and focus only on extending Salamander's functionality (Unicode support, etc.).

by otrov
Sure roman2, I'm hoping for Unicode solution too. I don't think that one excludes the other, but I was curious what's the relationship between two projects.

Thanks Jan for your explanation
All times are UTC+02:00
Page 1 of 2