We welcome any suggestions for new features or improvements in Altap Salamander. Please post one suggestion per report.
Post Reply
18 posts

Could you increase the number of allowable Hot Path Bar Items from 10 to 20? I'm pretty sure this won't add much more memory.
Top

It's not about memory, the limit here is the number of digits for the shortcuts. A shortcut in the form Ctrl+<number> is assigned to each hot path, so that it's really "hot" in the sense that it's immediately available using this shortcut.

However, there is a standing request for hot path expansion, allowing theoretically unlimited number of paths in a tree structure (much like the User Menu commands) and there are ways to simulate it. See this thread for more information. Next time, try to search the forum before you post, many questions have been already answered.
Ελληνικά rulez.
Top

Instead of digits, use letters. Ctrl-a, Ctrl-b. That would give us 26.
Top

I know what already exists and am simply pointing out that by using digits, the designers have limited the number of hot paths to 10.
If they changed to the alphabet (a-z) there would be 26 available slots.

Perhaps I'm the one weirdo in a million that needs more hot paths. And for that reason, I suspect my idea will never fly.
Though the code change would not be a very difficult one. And gee, I'm worth it!

I would also suggest that if the change were made that the key combination be Ctrl-Alt-alphabet or Ctrl-Shift-alphabet. This would avoid colliding with other common employments of the Ctrl-alphabet combination.
Top

nmccamy wrote:I would also suggest that if the change were made that the key combination be Ctrl-Alt-alphabet or Ctrl-Shift-alphabet. This would avoid colliding with other common employments of the Ctrl-alphabet combination.

I don't think that other shortcut series should be used. Having the ability to use custom (any) shortcuts (as it is now with plugin commands) would be great though.
Ελληνικά rulez.
Top

The shortcuts are for accessing the hot paths - diplaying the path in the focused panel - which is a very frequent operation.
Ελληνικά rulez.
Top

I any event, for what it's worth, I would like to see the option to have more hot paths and don't care if there are any short-cuts associated with them.
Top

Add ten more Hot Paths that don't have ANY short-cuts associated with them. I would use them! There might be one or two others that might use them as well.
Top

I kinda like the limit, it helps curb the tendency to make labyrinthine directory structures.
Top

I would also like to see more Hot Paths. I need a greater number of Hot Paths so badly that I recently bought Directory Opus just because it does not limit the number of quickly accessible folders.

And for those who need a solution right away: try Metaproducts AutoDialogs - I have requested and received compatibility with SS - and it supports an unlimited number of folders and shortkey combinations. 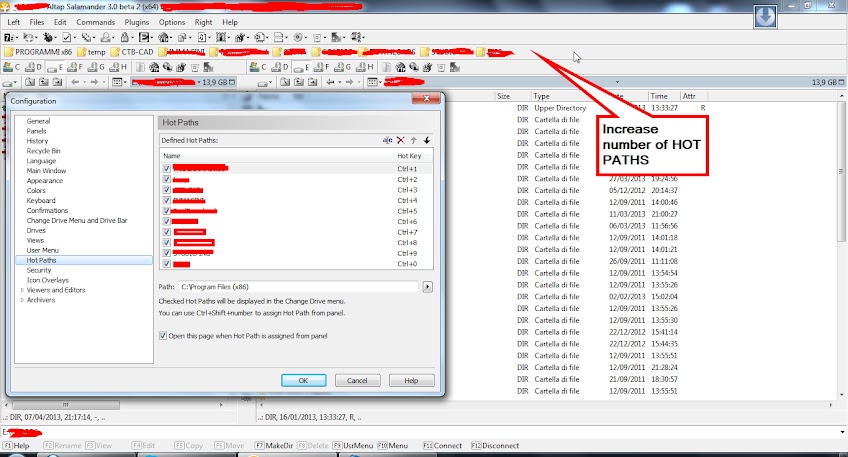 I've read some info in the forum..but i hope interesting increase the number of the "hot path"

Good job at all

+1
(just increase the allowed number, we dont need more keyb. combination for them, at least not SO much...)
Top