On Win10x64 1709 if you open Salamander, icon shows up on Windows Taskbar as expected.
If you then click the Salamander icon again, which I suppose under normal circumstances, would hide (minimize, I guess) the window, well on this machine at least, it "hides" Salamander "for good".

Salamander remains running (actually salamand.exe & salmon.exe) - as "background" processes, i.e., there is no associated "Window", no way to "bring it to front".

Also check with Salamander 3.07, again with the same results.

I "must" have run Salamander on the particular computer in the past, but don't recall any behavior like that.

by SvA
Please check your settings: 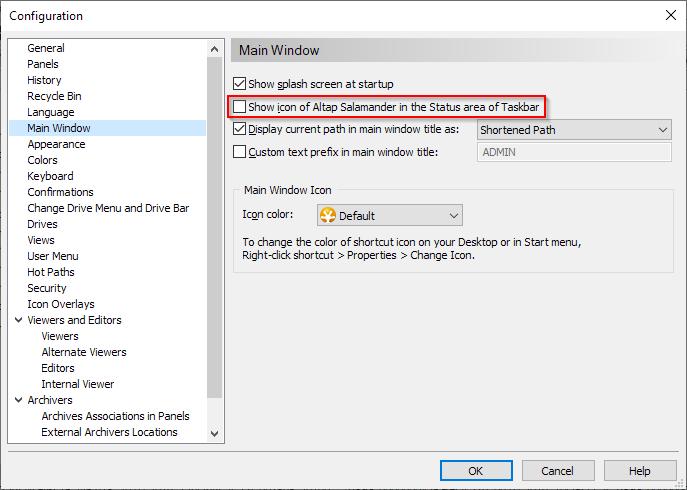 by therube
That setting is fine.


1.Visible
2.Hidden (so no longer displays)
3.WUL displaying Hidden windows (Visible, shows as, No)
WUL does have the ability to (re)display hidden windows (Make Visible, & if not for a utility like that...)


1. Visible
2. Hidden, after having clicked the Salamander taskbar icon (which "hides" it)
No way to "restore" the window to become visible (that might not be correct, come to think of it?)


Nothing stands out (including Sysinternal's Autoruns) on the computer that I can see to cause this behavior?

by therube
Not seeing where other programs are displaying that behavior.

Logging into a different User Account on the same machine works as expected.
So I guess it is not Win10 1709, but something in the particular User Account?
(What, I've yet to figure out?)

That setting is fine.

Er, well, not it was not.
I took it to be "fine", as it was checkmarked, so I just assumed it was meant to be.

There is no way I would have set that particular setting in 3.07.
Yet it was.
(Only thing I can figure was that somewhere along the line that setting was inadvertently clicked.)

And with that setting enabled, by default (I suppose), the icon was not displaying in the System Tray, so I did not even to think to look in there (at all - though when I checked the particular setting, that should have clued me in to do so - alas, that line of thinking did not flow through.


Anyhow, SvA, you were right